Yesteryear games to play with your grandchildren 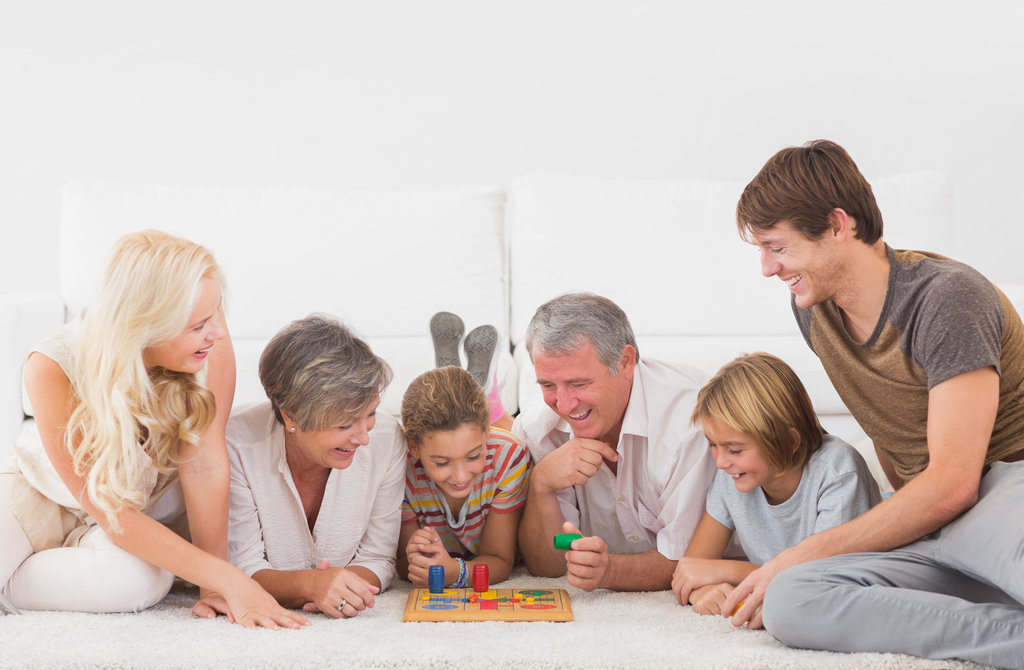 The expression “oldie but goodie” certainly rings true for the array of children’s games which have been enjoyed by generation after generation.

Playing games with your grandchildren is a great way to spend time together, so, we spoke to bloggers to find out about their favourite old-fashioned games which brought back fond memories of special moments with their families. 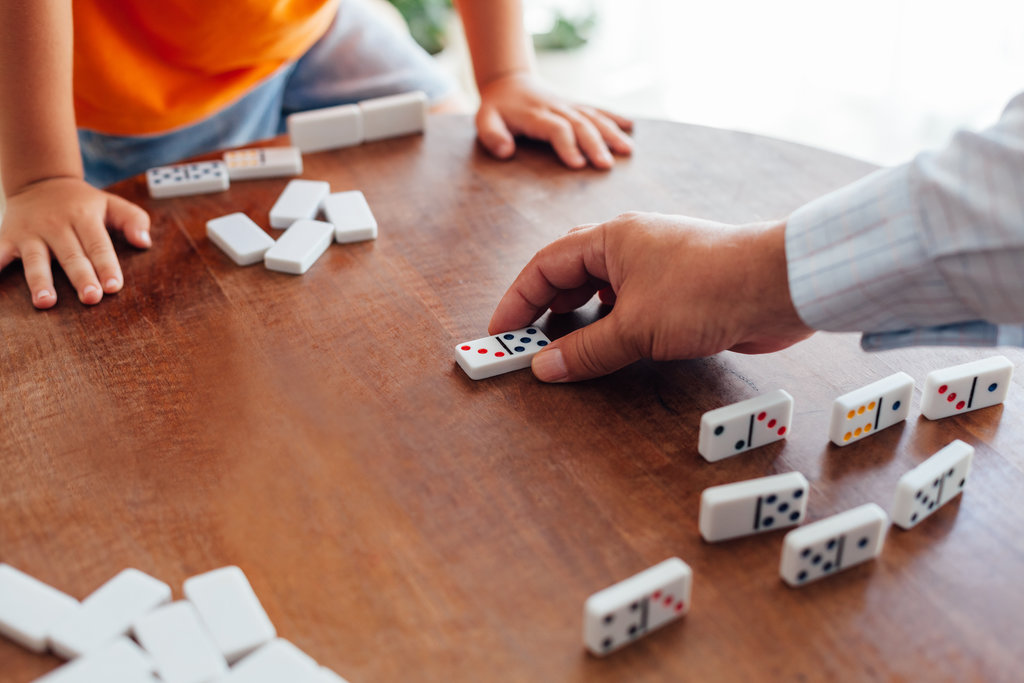 Dominoes is game for two, three, or four people and consists of rectangular tiles with a line dividing its face into two square ends. Each end is either marked with several dots or is left blank.

To begin, the dominoes are placed face down and ‘shuffled’. Players draw one tile, and the player drawing the highest double plays first. If no one drew a double, the person whose tile has the most dots plays first. Each player then draws seven dominoes, while the remaining dominoes are left face down on the table to be drawn later if a player is unable to play.

Players score points by laying the dominoes end to end, but the touching ends must match, for example, tiles with one dot must touch another tile with one dot.

Domino Rules says: “Dominoing occurs when one player goes out by playing all of his dominoes. The sum of the spots of all opposing players is computed and added to the dominoing player’s score (rounded to the nearest five).”

Laura Kate Lucas told us that this tactical strategy game conjures up many happy memories from her childhood: “I used to play Dominoes as a child with my family! I also used to love lining the dominos up to create a train and pushing the end one to create the 'domino effect' and knock them all down. It can get quite competitive but it is also educational and doesn't require a lot of moving around or energy expenditure. Dominos can also be found cheaply if you don't already own a set.”

Dominoes also holds fond memories for Kariss from Shy Strange Manic who played the game with her grandmother: “I have such pleasant memories of playing this with my grandmother, from the smell of the old-fashioned wooden box she kept them in, the feel of the smooth Dominoes, to the fun of 'knocking' on the wooden table when you had no more moves. These important bonding moments are imprinted in my mind. It's a great game to play for all ages because it keeps the mind active for both the young and old, and the games are short and don't require much setup or physical activity.” 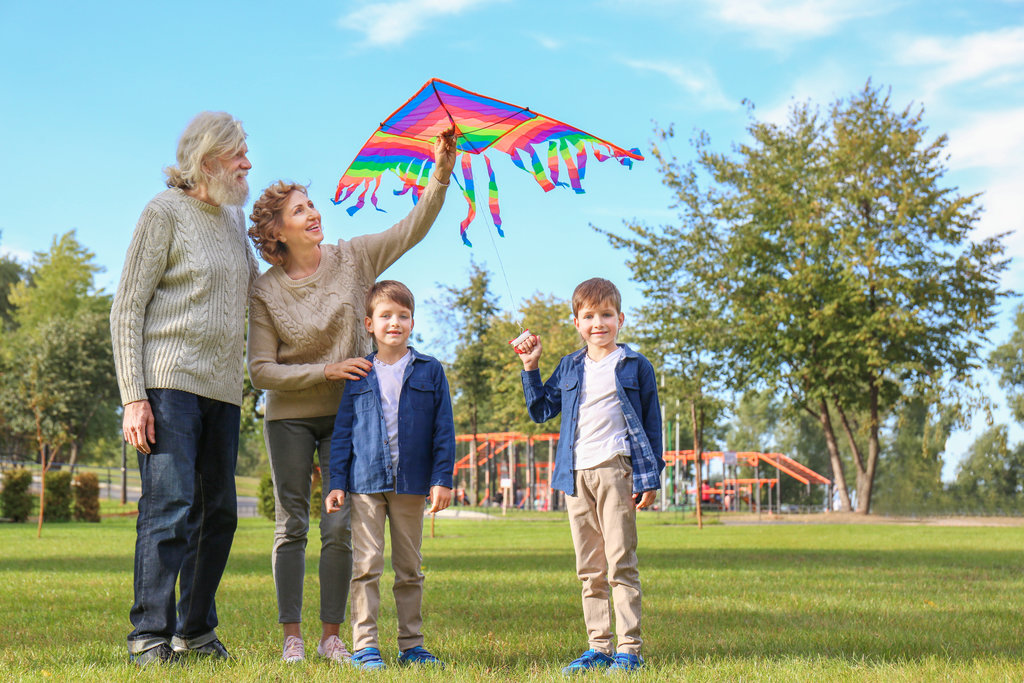 The humble kite has come a long way from its Asian origins and is an activity enjoyed by people of all ages. The oldest depiction of a kite is thought to be from the Mesolithic era following the discovery of a cave painting on Muna Island in Indonesia.

Since then, kites have been made and flown by people across the world and as the years have gone by, the materials and craftsmanship to create them has evolved.

Traditionally, the aim of kite flying is to knock your opponent’s kite out of the sky, however, people tend to just fly kites for fun as a way to enjoy the outdoors and get some fresh air. Whether you have a shop-bought kite or have crafted your own, there is no denying that seeing an array of colourful kites in the sky is a sight to behold.

Tracey from Pack the PJs told us that one of her favourite memories of her grandparents was flying a kite they made: “We were on holiday in a tiny caravan in Walton-on-the-Naze and the weather wasn’t very good. I think my grandad came up with the idea to make a kite to stop the grandchildren going stir crazy indoors.

“I can’t remember the actual making progress – my older brothers would have been involved with this – but I do remember flying it. We were on the grassland above the beach and grandad held the strings while my dad ran with the kite to get it airborne. It worked, and for a hand-made kite, it was a huge success. That Christmas, my parents got each of us a shop-bought kite, and every picnic from then onwards was accompanied by a session of kite flying.”

Tracey further explained that she continued flying kites when her children were born: “When I became a parent, I bought a range of kites. Where most people have a spare umbrella in the boot of their car, I have a kite! My children have grown up flying kites, they are the fourth generation of kite fliers in our family! I’m hoping that my grandchildren will carry on the tradition.”

Noughts and crosses, also known as Tic-Tac-Toe or Xs and Os, is a paper and pencil game for two players.

Players take it in turns to mark an X or an O on a 3x3 grid and the winner is the person who manages to place three of their marks in a horizontal, vertical, or diagonal row.

This observation and tactics game is one which Melanie from Two Plus Dogs uses to help keep her family occupied when travelling: “This game requires just paper and a pencil and can be played anywhere! It is also a great time-filler for amusing bored children when travelling.

“The game keeps the brain working for young and old and is a challenge for all ages and abilities. You can make the game more challenging by drawing a larger grid, such as 5x5. I love this game as I used to play it with my grandparents. I am a primary school teacher and still use it today for strategy and problem-solving skills in maths for children of all ages.”

The game can also be played online where a solo player goes head to head against the computer and is a great way to help with logical thinking. 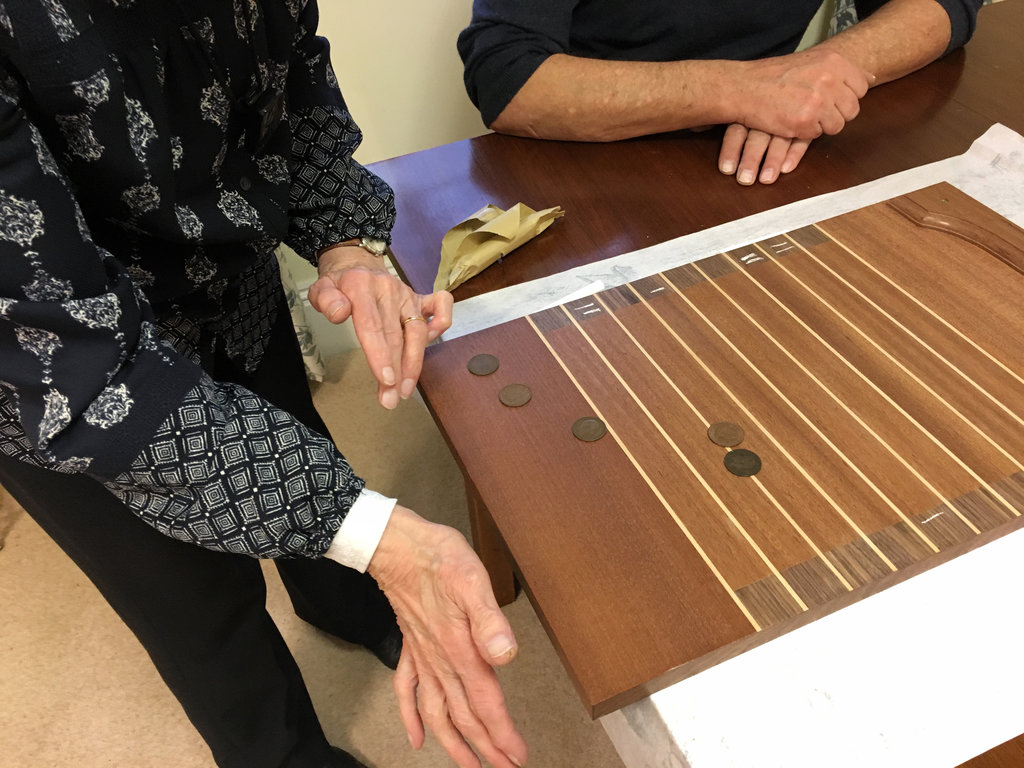 Shove Ha’penny is a board game which was played in pubs across the UK but its origins are believed to date back to the 15th century.

The game is played on a board that usually has several horizontal lines across it which are called ‘beds.’ Each player starts with five coins, and the objective is to push the coins so that they land squarely in the beds without touching the horizontal lines to score a point. While there are many variations of the rules, it is usually deemed that whoever has the most points after having played all their coins is the winner.

Heather from Just Geeking By told us she enjoyed playing the game with her parents and grandparents and even owns an original board: “I also introduced my fiancé to the game. Despite playing other games with my family, this one has the most history with it, especially as we have the same board that's been handed down through the generations. I don't know where our board came from originally but you can see all the dents and dings in it where it has been used. I can remember adding to them myself; it's living history.” 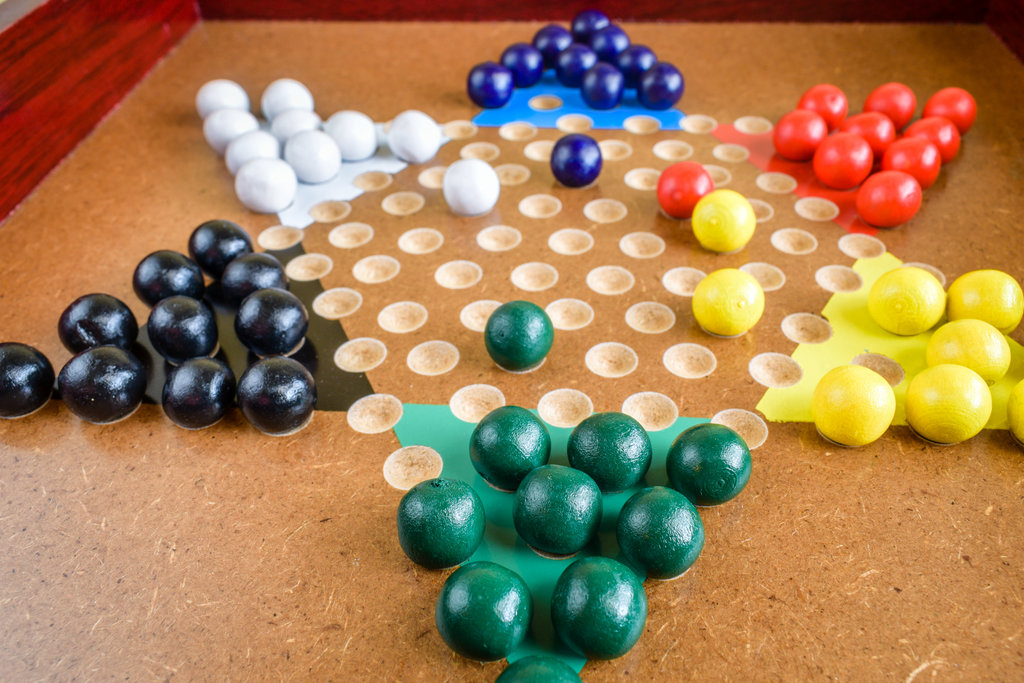 Chinese Checkers is a game with a few variations, but traditionally the “hop across” version seems to be one of the most popular.

Each player starts with ten marbles and the aim is to get all your marbles to the opposite end of the board, which is shaped like a six-sided star. When a player takes a turn, they can move one marble to an adjacent open space or jump over other marbles which are next to it. However, you can only jump over one marble at once, but you can do multiple jumps on the same go - just as long as the ‘hops’ are all lined up.

Chinese Checkers is a family-favourite for Monique from One Income Dollar: “With this classic game, you had to get all your marbles to the other side before your opponent. Games like these were nice to play because you could talk to your Granny at the same time.”

The highly competitive Dots and Dashes is another name for Dots and Boxes and is great for people of all ages.

Simply draw a 10x10 grid of dots on a sheet of paper. Players take it in turns to draw a line vertically or horizontally to connect two dots to create a square. Once a square has been formed a player puts their initials inside and the player with the most ‘captured squares’ wins the game.

Jo from Tea and Cake for The Soul explained that this sit-down game is great for people of all ages: “Dots and Dashes is a great game to play with grandchildren and has been popular in our family for generations.

Jo also told us what makes this simple game so exciting and beneficial to a child’s development: “This simple game has so many benefits! From turn-taking, sharing the pencil, the excitement of completing a box and the race to see who wins. Depending on the child's age, there is the educational value of counting, writing and pencil control. There's also the chance to have a conversation whilst you play without any distractions from any technology. Just old-fashioned fun with two people, a pen and paper.”

All the games mentioned in the article are perfect for people of all ages, including those who rely on mobility aids like straight stairlifts or curved stairlifts. Why not turn the television off and encourage the family to sit at the kitchen table for a fun-filled afternoon of yesteryear games?